The World Economic Forum (WEF) Global Gender Gap Report measures gaps between men and women in health, education, work and politics. The 2020 report revealed that the UK has slipped six places in the gender equality rankings. The audit last took place in 2018 when the UK was ranked the 15th most equal nation in world. Currently the UK is ranked 21st having been leapfrogged by Albania, Canada, Costa Rica, Latvia, Switzerland, South Africa and Spain. Globally the situation is improving, at the current rate of change it will take 99.5 years to achieve parity (down from 108 years in 2018).

WEF said the decline in the UK’s position was largely due to political and economic factors. Politically, there has been a decline in the number of women in ministerial positions. Economically, the UK has a persistent economic gender gap, ranking 58th in this area.

There are several reasons for this economic inequality, including differences in pay and a lack of representation in emerging fields and boards of directors. Analysis conducted jointly with LinkedIn revealed that women represent only 12% of cloud computing jobs, 15% in engineering, 26% in Data and AI. There were two areas where women outnumbered men in fast-growing jobs: content production and people and culture.  WEF highlights the importance of equipping women with the skills required for the most in-demand jobs, not least because it prevents skills shortages which in turn hold back economic growth. The figure below shows that the UK has 27.2% women in companies’ board of directors. 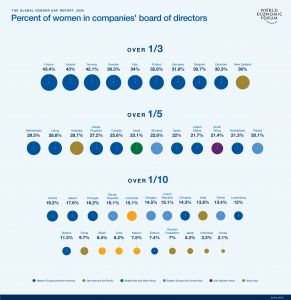 There are some positive gender parity achievements in Britain. The UK has joint 1st place for literacy, enrolment in tertiary education and the proportion of female professional and technical workers.

On course to close gender equality gap in four generations

Out of the four key sectors analysed, politics remains the area where least progress has been made to date. The increase in women holding political positions however, has been instrumental in reducing the global gap to 68.6%. The political gender gap will take 95 years to close, compared to 107 years last year. Across the four areas analysed (health, education, work and politics) at the current pace of change, gender equality will be achieved in 99.5 years. This represents four generations despite women currently having high-profile leadership roles at the European Central Bank and the World Bank, and leading governments in countries including Finland, Germany and New Zealand. 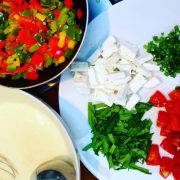