News
You are here: Home / News / Uncategorised / How to plan for success: advice from Thomas Bjørn 2018 Ryder Cup winning ...

A few weeks ago, Europe won the Ryder cup by a 7-point margin; this success has been credited to the meticulous planning of Captain Thomas Bjørn. Alexander Charles Associates along with some select clients, attended a networking lunch hosted by the London Sporting Club, where the Danish skipper shared insights into the process which led the European side to thrash their American counterparts. 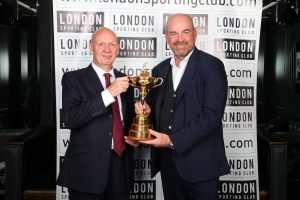 The networking lunch began with guests having their pictures taken with the great Dane and the Ryder Cup itself, before moving from the bar to the dining room for the start of a delicious lunch and the main event – Thomas Bjørn discussing his career and describing how he led his side to victory. Many of the strategies employed in Bjørn’s plan translate well into the world of business; from how to choose your team, to maintaining camaraderie, and apportioning tasks so people can play to their strengths.

Ryder Cup planning and selection takes place months before the event itself, but for Bjørn planning for golfing success began when he was a boy dreaming of victory on the fairways. He became the most successful Danish golfer and has won fifteen tournaments globally on the European Tour. In 1997 he also became the first Dane to qualify for a European Ryder Cup team and this year he led the European Ryder Cup team to a historic victory. Bjørn made a point of speaking personally or on the phone, to each person whom he selected for the team and to those who he had to turn down. He places a high value on the camaraderie of the group and the team got involved in a group chat on What’s App prior to the start of the competition, this led to them getting to know each other better and getting along well during the tournament. Bjørn also believes in having a team with a wide selection of talent and skill, rather than relying solely on statistics. His wildcard selection of Sergio Garcia raised eyebrows when it was announced but resulted in the Spaniard exceeding Sir Nick Faldo’s score at the top of Europe’s individual points list. Bjørn’s strategy behind which players he played and when, was underpinned by selecting individuals so that they could play to their strengths; limiting some players to only fourballs, selecting pairings on the first day which allowed the European side to coolly climb their way back from 3-1 down, and a batting order for the third day which pitted Europe’s strongest players against the US side who struggled for form.

Also, present was Mark Foster whose swimming achievements include: six World Championship titles, two Commonwealth titles and eleven European titles. He shared some of his best anecdotes after the lunch and proved an excellent raconteur.

Unemployment is at its lowest level for forty years, so why does a fifth of...
This site uses cookies More info
Scroll to top